You will have a flight to Cappadocia if you want we can book for you. Then we will pick you up from airport to transfer you to your hotel in Goreme. 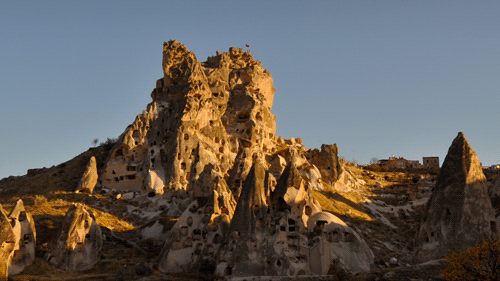 We will pick you up from your hotel at around 09.30. we will visit Uchisar castle, Goreme Open Air Museum, Pasabag Valley fairy chımneys, Devrent ( imagination )Valley, avanos pottery demostration, Three Beauties in urgup.

After the tour we will drop you off to your hotel.

If you want we can arrange a hot air balloon flight early morning to see the sunrise.

We will pick you up from your hotel at 9.30. we will start our tour with Goreme Panoramic point, Kaymaklı underground city, Pigeon valley, Hiking in Rose valley and Cavusin Old Greek village. After the tour we will drop you off to your hotel.

Day 4 ( Drive to Gaziantep and visit of the city, including breakfast) 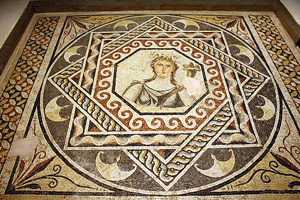 We will pick you up from your hotel and drive to Kahramanmaras but on the way we will stop for the Karatay Caravanserai. In Kahramanmaras we will stop to taste the famous Turkish ice cream. Then we will go to Gaziantep to visit Gaziantep Mosaic Museum. And also the famous copper bazaar and we will taste turkish baklava. ( accommodation in Gaziantep )

Day 5 ( Drive to Sanlıurfa, breakfast including)

We will go to Sanlıurfa today. On the way we will stop to see the magnificent ruins of the ancient city of Zeugma ( Belkıs ) by the Euphrates River. Belkıs/ Zeugma is considered among the four most important settlement areas under the reign of the Kingdom of Commanage. The ancient city of Zeugma, originally, was founded by Selevkos Nikador, one of the generals of the Alexander the Great, in 300 B.C. Lunch time we will be in Sanlıurfa. Accommodation in Sanlıurfa.

Day 6 (Sanlıurfa city and drive to Kahta , breakfast and dinner including ) 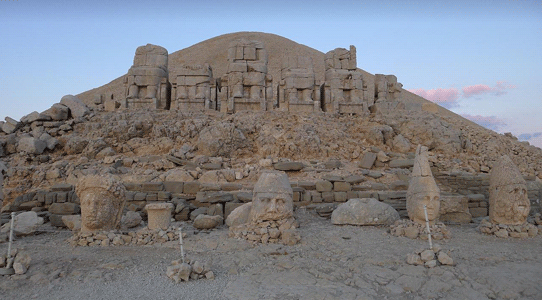 We will see the Old City Harran which is famous for its conical-shaped local residences very near to Sanlıurfa. According to both the Bible and Quran Sanlıurfa is the birthplace of Abraham before his migration to Canaan, now Palestine. Local Muslim legend differs from that of the other great monotheistic faiths by the intervention of one vicious and cruel King Nimrod, who had Abraham launched from a catapult from the city's citadel to fall into a pile of burning wood. Happily, God intervened, and turned the fire to water and the faggots to fish. We can visit the the cave where Abraham was born and mosque complex surrounding Abraham's Cave and The Pool of Sacred Fish (Balikligol) around it. The cruel ruler's giant slingshot is represented by two Corinthian columns still standing atop the citadel. After the visitation we will drive to Kahta and on the way we will stop to see Ataturk Dam.Accommodation in Kahta.

Day 7 ( Climb to Mount Nemrut, drive to Mardin, including breakfast ) 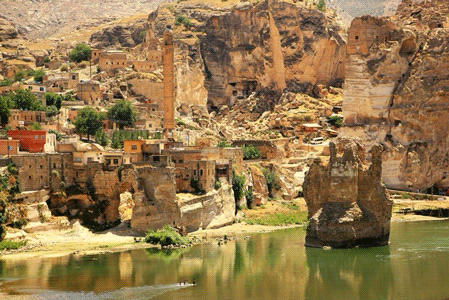 We will depart from hotel very early to watch the sunrise from the top of the Mt. Nemrut. In 62 BC, King Antiochus I Theos of Commagene built on the mountain top a tomb-sanctuary flanked by huge statues (8–9 m/26–30 ft high) of himself, two lions, two eagles and various Greek and Persian gods, such as Hercules-Vahagn, Zeus-Aramazd or Oromasdes (associated with the Persian god Ahura Mazda), Tyche, and Apollo-Mithras. These statues were once seated, with names of each god inscribed on them. In 1987, Mt. Nemrut was made a World heritage site by UNESCO. We will visit Arsemeia, Cendere Bridge, Tumulus of Karakus. After then we will drive back to hotel for breakfast and we will depart for Mardin. Accomodation in Mardin.

Day 8 ( Visitation of Mardin city and drive to Batman, including breakfast and dinner)

Mardin is a very old city not far from the border with Syria in a unique location between the Tigris (Dicle) and the Euphrates ( Firat) rivers. Archaeological excavations in the area have determined that Mardin has been a human settlement inhabited since 4500 B.C. Mardin is a city where many religions and languages have coexisted in peace for centuries. It is the location of several of the oldest monasterys in the world. We will visit one of them called the Monastery of Deyr-az-Zaferan just outside of town, founded in 762 A.D.

After the visitation we will drive to Hasankeyf which is an ancient city, with roots going back 10,000 years. It was declared a natural conservation area by Turkey in 1981. The Romans had built a fortress on the site and the city became a bishopric under the Byzantine Empire. It was conquered by the Arabs, in ca. 640, who built a bridge over the Tigris river. The city was successively ruled by the Artukids and Ayyubids. The city was captured and sacked by the Mongols in 1260. Following the Ottoman ascendancy established by Selim I in the region in the early 16th century, the city became part of the Ottoman Empire during Sultan Suleyman.With its history that spans nine civilizations, the archaeological and religious significance of Hasankeyf is considerable. Some of the city's historical treasures suh as mosques, islamic tombs and cave churches will be inundated if construction of the Ilısu Dam is completed. After this place we will have lunch and we will drive to Tatvan which is a town in Eastern Anatolia, located on the western shore of Lake Van, which is the largest lake in Turkey. Acommodation in Tatvan.

Day 9 ( Visitation of Akdamar Church and Van , including breakfast and dinner) 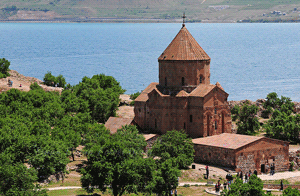 We will leave from Tatvan to visit Van city situated on Lake Van, from which the city has taken its name. We will visit Van Castle. Under the name of Tushpa, it used to be capital of the kingdom known in history as the Urartian. We will take a ferry for going Akdamar island to visit Akdamar Church which was dedicated to the "Holy Cross" is situated in a prominent place on the island and presents an impressive picture when approached from different directions. The various shades of red of the tufaceous cut stone used in the construction form a striking contrast with the deep blue waters of the lake and the snow-capped majestic mountains in the background. The wall structure of the church is made of rectangular cut stones over a two-tiered base, similar to the other Armenian works in the area. Accommodation in Van.

Day 10 (Visit of Ishakpasha Palace and drive to Kars, including breakfast) 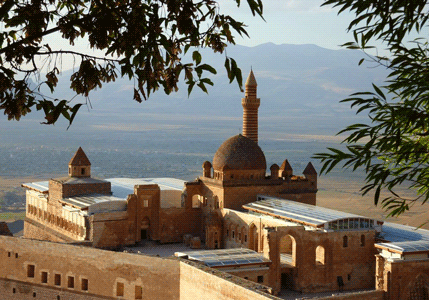 We will go to Dogubeyazıt on the Silk road. At the Iranian border we will see a site known as the Crater Hole. We will see Mt Ararat rises 5,165 meters. Mount Ararat in Judeo-Christian tradition is associated with the "Mountains of Ararat" where according to the book of Genesis, Noah's ark came to rest. It also plays a significant role in Armenian nationalism and irredentism. We will visit the Ishak Pasa Palace. It is one of the most distinguished and magnificent examples of the 18th century Ottoman architecture The construction lasted some 8 years in the Period of Tulip "Lale Devri" 1734, the reign of Sultan Ahmed III, of Ottoman Empire. After the visitation we will go to Kars. Accommodation in Kars.

we will leave for the city of Ani lies east of Kars and along the Arpacay (Akhuryan) River, which forms the border with Armenia to the east. Situated along a major east-west caravan route, Ani first rose to prominence in the 5th century AD.. The many churches built there during this period included some of the finest examples of medieval architecture. With a peak population of about 100,000 by the early 11th century, Ani was larger than any European city and rivaled Baghdad, Cairo, and Constantinople in its size and magnificence. It remained the chief city of Armenia until Mongol raids in the 13th century and a devastating earthquake in 1319 sent it into an irreparable decline. Eventually the site was abandoned. The handful of surviving churches and the remnants of the city walls attest to the extraordinary quality of Armenian stonework during the Middle Ages. The proximity of this ghost town to the border, places some restrictions on visitors, but the ruins of the mosques and numerous churches, together with the cathedral and the citadel, all inside city walls, are really worth seeing. . We will also visit Kars Castle. Accommodation also will be in Kars.

Day 12 (Drive to Erzurum and visit of the city, including breakfast)

After have breakfast in this impressive city Kars we will drive to Erzurum. We will visit a Seljukian School called Medrese dates bact to 12th century and also ethnographic museum. We will also visit an old caravan stop where the local black stone is mounted in silver and gold. Accomodation in Erzurum. 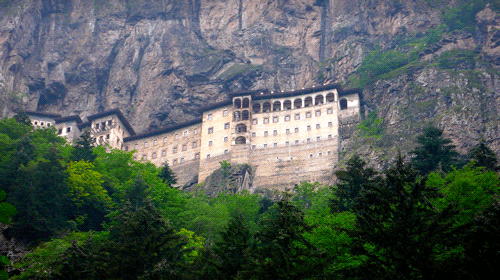 We will leave from Erzurum to Trabzon enjoying its wonderful nature. On the Way We will have many photo stops and Karaca Cave. We will visit Sumela Monastery which stands at the foot of a steep cliff facing the Altındere valley in the region of Macka in Trabzon Province, is popularly known as "Meryem Ana" (The Virgin Mary). The building complex is nearly 300 metres high and was built following the tradition of monasteries that were located outside the cities in forest near caves and sources of water.Overnight accommodation in Trabzon.

Day 14 (Visit of Trabzon and flight back to Istanbul, including breakfast)

We wll visit Trabzon which is the largest port of Black Sea. Trabzon's history goes back to the 8th century BC. During the World War I it was captured by Russians but it has been taken back to the hands of Turkey by Treaty of Lausanne. In the Byzantine period caravans from Persia were passing through the Trabzon to sell their goods to Europe. Trabzon is still a busy trading centre. We will visit St Sophia of Trabzon which is the most important examples of the buildings of Byzantine Era. After the visitation you will fly to İstanbul or any other cities in Turkey.

-The itinaries are flexible.Just let us know how many days you have in Turkey.
Sure we will make the best for you..