Pergamum was an ancient city founded by colonists on the Aegean coast of Anatolia at the site of the present day city of Bergama. It was on a tributary of the Bakırçay( Caicus River ), enclosed by high mountains. Fertile, self-contained and easily defended, it provided the perfect setting for the maintenance of a city state. 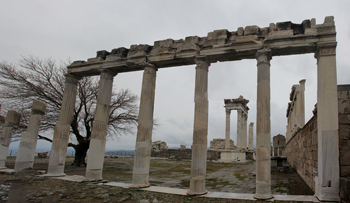 We will pick you up from your hotel at 09.00am from your hotel in Selçuk or Kuşadası  and drive to Pergamon Ancient City. Pergamum Acropolis was never the same as the function of the acropolis in Athens. In Athens everything was focused on religion, whereas in Pergamum it was on social and cultural activities, or in other words, daily life. The buildings of the Acropolis were designed to be seen from below and to impress those viewing the city from the valley. After visit Acropolis we will visit Gymnasium, The temple of Athena which was dedicated to victory-bringing Athena by king Eumenes, The Library of Pergamon which was the second of the three famous ancient libraries. It contained 200.000 volumes. The Temple of Trajan was a 2C AD temple in Corinthian order, dedicated to Trajan, built by his successor Hadrian, The Zeus Altar and The Temple of Dionysos. We will see also Theatre which is steepest raked Hellenistic theatre in the world and the capacity was 10,000 people.
After the visitation of Pergamon we will visit Asclepion which was a sanctuary and healing.  Asclepius, son of Apollo, the god of healing, was a famous physician. His mother, Coronis, a princess of Thessaly, died when he was an infant. Apollo entrusted the child’s education to Chiron, a centaur, who taught Asclepius the healing arts. Asclepius, when grown, became so skilled in surgery and the use of medicinal plants that he could even restore the dead back to life. Hades, ruler of the dead, became alarmed at this and complained to Zeus, who killed Asclepius with a thunderbolt. The healing center, Asclepieum, had been something very similar to a modern natural healing clinic. Patients were given exercises, drugs, herbal remedies, or could take the honey cure, drink the waters of the spring or be treated by suggestion.  We will visit also The Propylon, Stoas, The Library, The Theatre, The Temple of Asclepius , sleeping rooms and The Sacred Fountain, The Tunnel is a vaulted subterranean passageway. The tour finish at 03.00pm and then, we will drop you off to your hotel.

-Pick up/ Drop off from your hotel,
-English-speaking tour guide,
-Entrance  fees,
-Lunch and taxes.

You can also choose the same tour in private as well. We will organize everthing according to your taste or interests and private requests.
Please send us an email (info@turkeyboutiquetour.com) for more information or to make booking.