The origin and roots of Sufism lie in the life and practices of the Prophet of Islam and the Qur’an. Sufism espouses a well-founded and thoroughgoing interpretation of Islam, which focuses on love, tolerance, worship of God, community development, and personal development through self-discipline and responsibility. A Sufi’s way of life is to love and be of service to people, deserting the ego or false self and all illusion so that one can reach maturity and perfection, and finally reach Allah, the True, the Real. 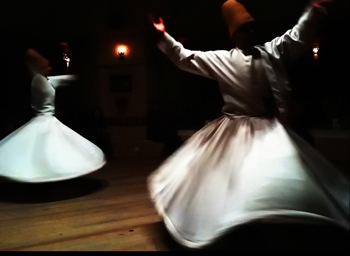 The Order of the Whirling Dervishes is one branch of the vast Sufi tradition of Islam. The universal values of love and service shared by all Sufis are very much relevant to the social and political realities of today, and this ritual, which is only performed by the Order of the Whirling Dervishes, has come to symbolize these values in the hearts and minds of millions throughout the world.
Known to the west as Whirling Dervishes, the Mevlevi Order was founded by Mevlana Rumi in the 13th century. The Order wrote of tolerance, forgiveness, and enlightenment. They survive today as a cultural brotherhood. They are not theatrical spectacles but sacred rituals. The ritual of the Mevlevi sect, known as the sema, is a serious religious ritual performed by Muslim priests in a prayer trance to Allah.
Mevlevi believed that during the sema the soul was released from earthly ties, and able to freely and jubilantly commune with the divine. Dervish literally means "doorway" and is thought to be an entrance from this material world to the spiritual, heavenly world. 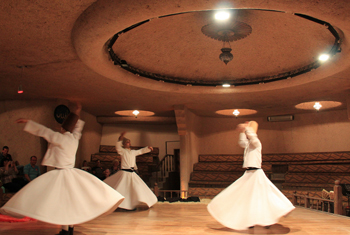 The Whirling Dervishes played an important part in the evolution of Ottoman high culture. From the fourteenth to the twentieth century, their impact on classical poetry, calligraphy and visual arts was profound. Rumi and his followers integrated music into their rituals as an article of faith. Rumi emphasized that music uplifts our spirit to realms above and we hear the tunes of the Gates of Paradise.
.We can offer Whirling dervishes Ceremonies in Saruhan Caravanserai in Capadocia .Caravanserai was a roadside inn where travelers could rest and recover from the day's journey. Caravanserais supported the flow of commerce, information, and people across the network of trade routes covering Asia, North Africa, and southeastern Europe, especially along the Silk Road.
The whirling Dervishes ceremony starts at 9.00 pm. It takes 1,5 hours in total and the price is 30 euro per person including; transfer from and to your hotel.  Sema is a spiritual act, so please do not applaud while watching and the concentration is very important for the dancers, children under the age of 10 are not permitted at this ceremony. It will also not be possible to take pictures during the ceremony.